Archived post from “The Aroma of Bread,” first published 13 February 2016. 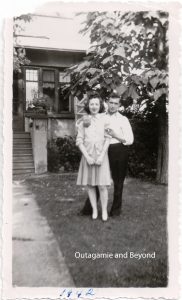 1942 – Outside the Fassbender home in Hollandtown

Marie met Butch when she was just 19 years of age, and as her brother states, she was in her “hyper faze.”

My in-laws met in June 1941 at the wedding of Butch’s brother, Hubert (Cub), to Dolores Wenzel. It was a small ceremony, taking place in the pastor’s chambers. Butch was standing up for Cub, and as a long time friend of Dolores, Marie had been asked to stand up as Dolore’s witness. The two girls had become friends when Dolore’s father worked as a hired hand on the Campbell farm, and the Wenzel family lived in a small house located on an edge of the Campbell farm. Marie agreed to be Dolore’s attendant, never imagining that her life was about to change.

Following the marriage of Cub and Dolores, the two couples remained friends. When Butch and Marie married in 1946, Dolores attended Marie as a bridesmaid, and Cub was a groomsman. It was into their home in Dundas, that the newly wed Butch and Marie moved, while their own home was being constructed in Hollandtown.

But about Butch and Marie. Shortly after they met, they started dating, and Marie loved to tell this story about herself from that period in time. Although she had met and was dating Butch, she was keeping her options open, and continued dating other men, specifically a 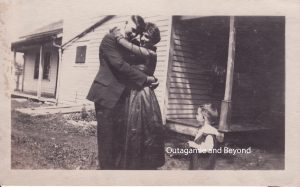 Couple unidentified, but a great shot from the drive of the farm, and both the front and side porch. Notice how close the porches are to each other.

man named Bill. On one particular day, she was visiting with Bill in the living room at the farm. They were having a great time, and Marie lost trackof the time, almost forgetting that Butch would soon be arriving to pick her up for an evening out. That is until she heard his car pull into the yard. As he headed to the front door, Marie began rushing Bill out the side door – or vice versa, I never thought to ask. Her father, Walter, met Butch at the door, stalled him a bit so that Bill was out of the house, and Marie could catch her breath, then let him in.

The next day, Walter sat Marie down and said that enough was enough, she had to make a choice, as he was not going to go through all that drama again. She made her choice, and for the next five years she and Butch dated, getting married at St. Mary’s in Hilbert on May 7, 1946. They would have celebrated 70 years of marriage this year!

* Celery, cut into chunks for broth

Put chicken in a pot with just enough water to cover it. add the celery and cook for 1 1/2 hours. Remove chicken from broth and cool. When cool, bone the chicken, and skim the fat off of the broth. Season the broth with salt and pepper, or Nature’s Seasons. Add carrots and celery to the broth, cook for five minutes, keeping the broth at a low boil.

Mix all ingredients. Using a spoon, drop by small spoon full the dumplings into the low boiling broth. Cover the pot, cook the dumplings for 15 minutes ( do not take the cover off the pot).

After the dumplings have cooked, add the chicken and cooked noodles to the pot. Cook for 5 more minutes before serving.