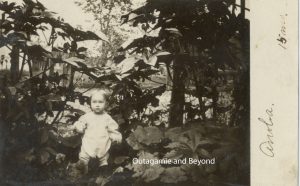 I have always loved Frances Hodgson Burnett’s book The Secret Garden. I love the book, I loved the broadway play, (and was lucky enough to have seen the original broadway cast), and I also love the movie that was released in 1993. There is a dream scene in the movie, where a young child is walking through huge fronds of greenery. I have to admit this is not a favorite part of the movie for me, I can just feel the sadness that this child feels as it searches for its mother.

My great-grandfather was a major gardener, the gardens on his property in Wausau, Marathon, Wisconsin were massive. I just wish that there had been color photos back in the early 1900s, so that I could really seen them in all of their splendor. As a side note, he also raised prize winning chickens, had sheep and other animals on his little “farm” in the city. But that is for another post.

As I was adding a few photos to my Legacy Family Tree database this morning, I came across this image of my grandmother, Anola Josephine Cook, age 15 months. She was photographed in September 1911 walking through massive fronds of greenery in her father’s garden. I couldn’t help but be taken to the scene in The Secret Garden. I can be pretty confident though that she was walking straight towards her father who was holding camera. Knowing he would be right there to pick her up if she fell down.