As I continue to go through files, I continue to be surprised by what I am finding hiding inside of them. Interesting things, printed in the early days of information being uploaded to the internet. My recent find was a printout stating that my great-grandfather had, at the age of 40, enlisted in the newly formed Wisconsin State Guard on August 23, 1917.

After a little bit of internet and newspaper searching, I learned that on July 9, 1917, an announcement was made in Madison, that a state guard would be formed to take the place of the Wisconsin National Guard which would leave the state in August of 1917. This new guard would be comprised of men too old or too young for the WWI Draft. It did not exempt the men from the draft once they became of age, or the draft reached out to men age 31 to 45, which it did with the third draft registration, on September 12, 1918. ((“Wisconsin’s Military History,” database, Wisconsin State Guard (www.b-1-105-us/history/wsg/htm\#tables : accessed 10 Feb 2018).))  Lewis H. Cook, County Clerk of Marathon County appeared that day at the local draft board in the 1st Ward of the city of Wausau, to register for the draft. He was noted to be of Medium height, Medium build, with blue eyes and light hair.

The new organization was to serve as a Home Guard Unit, and would be called upon in emergencies such as floods, large conflagrations, riots, etc. or whenever the police force of the community needed to keep order, or to meet a situation. ((“Wisconsin Guard Is Formed Here,” Wausau Daily Record-Herald, 24 Aug 1917, Friday Evening, p. 1, col. 3, digital images, Newspapers.com (www.newspapers.com : accessed 10 Feb 2018).))

By this time Wausau had already organized. Following the declaration of war with Germany on April 6, 1917, the men of Wausau came together and organized as the Citizens’ Training camp of Wausau. The purpose was to drill “young men who might be eligible as soldiers of the U.S. army, to foster patriotism and to do police duty if any emergency demanded.” A petition was created and circulated on April 9th, just three days after the declaration of war. It was “quietly signed in two days.” The following Sunday they met, elected a board of governors, and the Citzens’ Training Camp “soon came into being.” “We were a motley array of citizens that met for the first drills, and we knew little about drill work. But all were fired with a zeal to be of service in any small way, that might help our country to bring to a successful issue the mighty tragedy into which we had all been thrown.” “Out of the 293 that have entered the ranks, eighty-one enlisted in the regular army.” Many immediately being “taken from the ranks to become corporals and sergeants as soon as it was learned that they had had military training.” The men of the Citizens’ Training Camp ranged in age from nineteen to fifty-five years of age, and they drilled nights and Sundays. ((“Company C Club To Meet Yearly,” Wausau Daily Record-Herald,  20 Apr 1920, Tuesday, p. 1, col. 7, digital images, Newspapers.com (www.newspapers.com : accessed 14 Feb 2018).)) 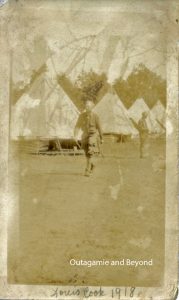 On August 23, 1917, when Colonel H. M. Seaman, inspector general of the Wisconsin State Guard, arrived in Wausau, enough men from this original training camp enlisted in the new guard to form Company C, 10th Infantry. The Wausau company was the 5th in the state following Milwaukee, Green Bay, Stevens Point and North Milwaukee. ((Wisconsin Guard is Formed Here,”)) Fifty-two men signed the role that night, ((“Short News Items,” Wausau Daily Record-Herald, 27 Aug 1917, Friday Evening, p. 1, col. 3, digital images, Newspapers.com (www.newspapers.com : accessed 10 Feb 2018).)) and formed a line to respond to roll call. The roll call for forty-six of the fifty-two men were listed in the Wausau Daily Record-Herald published August 24, 1917, ((“Wisconsin Guard is Formed Here”)) but unfortunately my great-grandfather’s name was not one of the forty-six. The full roster was published by the coordinator of the Marathon County Rootsweb site, but as of today, Rootsweb is down so I cannot access the information that I printed September 13, 2006.  The names included on the webpage were compiled from the actual service records for the 10th Separate Company, Company C, 10th Wisconsin State Guard. These papers (at least at that time) were located at the Marathon County Historical Society. The entry for my great-grandfather states:

Unlike any other state guard, the companies of Wisconsin were trained, and equipped by the state, rather than rely on the War Department for the donation of surplus equipment. The companies were paid an allowance for Armory rent, and an allowance for the upkeep of clothing and for general expense. They were issued uniforms that were different in appearance than those worn by the Wisconsin National Guard and the United States Army. The men were armed with arms issued to the State by the War Department, specifically for this purpose. ((Wisconsin. Adjutant General’s Office, Biennial Report of the Adjutant General, State of Wisconsin (University of Minnesota, 1910, digital images, Google Books (www.books.google.com, digitized 29 Mar 2011 : accessed 13 Feb 2018).))

It was determined that all guards attend a week long training camp the summer of 1918. The Wisconsin State Guards met at Camp Douglas, Juneau County, for week long camps during the weeks between July 6 to August 2, 1918. It was a strenuous week of exercises for the infantry field camp. The Wausau guard, part of the Tenth Regiment, with headquarters in Eau Claire, and which included the guards of Wausau, Superior, Menomonie, Eau Claire, Chippewa Falls, Ladysmith, Neillsville, Mauston and LaCrosse, attended camp during the week of July 27. The schedule for each day kept the guard busy from 6:00 a.m. with First Call, till Taps at 10:30 p.m. Each regiment was required to do guard duty, and spend one morning on the rifle range. ((“Solid Week of Military Life,” Wausau Daily Record-Herald, 25 Jun 1918, Tuesday Evening, p. 1, col. 5, digital images, Newspapers.com (www.newspapers.com : accessed 12 Feb 2018).)) The members of Company C, First Battalion, and the Tenth Infantry band arrived home in Wausau on August 2, 1918, riding the 4:45 p.m. Northwestern train. They then marched to their quarters at the Y.M.C.A. where they disbanded. The band went on to their headquarters at the Armory, where they also disbanded.

The Wausau guard was honored with a historic guard mount that reads: “Special orders, No. 6, General King, Wisconsin’s foremost soldier, has been pleased to make the following memorandum in a note to the commanding officer, which is published for the information of  all concerned: Company C at guard mounting eight a.m. scored next to perfect. It was the finest performance clear through to the posting of the first relief I have ever seen on these grounds. So far as I can recollect and I can recollect pretty well My yearly book will show. The words of commendation from the general are the highest compliment a company can receive. The splendid exhibition was made possible by the earnest hard work done by Captain Becker and C company at the home station and in this camp. No further comment is necessary. By order of Col. Cousins.” Governor E. L. Phillip had this to say about the men of the Wisconsin State Guard at the conclusion of the camps: “These men are not toy soldiers. They come from the rank of the busy men and come here for military training and have made good use of every minute during their stay. There probably is no better training ground than Camp Douglas, dry and healthful, splendid water, in fact just the place to give men real pep.” ((“Band and Guards Come Home Today.” Wausau Daily Record-Herald, 2 Aug 1918, Friday Evening, p. 1, col. 7, digital images, Newspapers.com (www.newspapers.com : accessed 13 Feb 2018).))

A second camp was held the following year, again in July. Company C maintained its position as one of the leading companies of the regiment during this second week of hard work, and hard play.

The Wisconsin State Guard as a whole was called out 3 times. The first was September 16-18, 1918 in Clark County to assist in the search for draft dodgers. (Look for the next post for details about the search for the draft dodgers). The second time was August 20-24, 1919 as guards during the Cudahy riots. The final time they were called was September 9-12, 1919 when troops were assembled in the armory at Manitowoc as strike riots at Two Rivers started to escalate, but they were not used.

On July 11, 1919, it was reported that Governor E. L. Philipp had ordered for the reorganization of the Wisconsin National Guard. Included in the order was the offer to “Every officer of Wisconsin state guard who passes the examination required by the national defense act and will take the oath of service prescribed by the act, will, on approval by the war department, be also commissioned in Wisconsin National guard reserve.” ((“Issues Orders for Re-Organization,” Wausau Daily Record-Herald, 11 Jul 1919, Friday Evening, p. 1, col. 1, digital images, Newspapers.com (www.newspapers.com : accessed 13 Feb 2018).))

In March 1920 the order was given for Company C, Wisconsin State Guard to be mustered out of service. The company commanders were directed to issue honorable discharges to all men of their commands. The order stated: “The state military authorities desire to express appreciation of the loyal, patriotic and efficient service rendered by the officers and enlisted men of the Wisconsin State Guard during the period of emergency.” ((“Company C to be Mustered Out,” Wausau Daily Record-Herald, 10 Mar 1920, Wednesday, p. 1, col. 6, digital images, Newspapers.com (www.newspapers.com : accessed 14 Feb 2018).))

On the night of April 19, 1920, the men of the Citizens’ Training Camp, and later the Wisconsin State Guard, gathered for a celebratory dinner, to reminisce, and to honor the work that they had done. Following the suggestion to meet occasionally, it was decided to meet annually as the Company C Club. A. P. Woodson stated that “he had formed many friendships as a member of the unit that he would not have made otherwise.”

Henry C. Smith, made the closing remarks: “The life of Company C draws on to its close. If we have helped in any little way and in a workmanlike manner the duties that have been assigned us, we have been fully recompensed. Let us cherish the memories of these three years we have had together, and resolve to profit by the discipline we have received during these dark days of the world’s most tragic period.”

“At the close of the singing of ‘America’ the party ended and the members of the company departed.” ((Company C Club to Meet Yearly))