“Beautiful Riverside! Silent city of the dead wrapped in the somber mantel of dreamy autumn, how sweet seems the slumber of those dear to our hearts who now live but in our memories, and rest enshrinek in those boundaries. In straying through its silent pathways, stopping here and there to study the name, date of birth and death of someone, who in years past bustled near us on the busy mart of life, what sermon these slabs preach to us, on the uselessness of much we crave for, or the blindness that hides from our vision so much that we should see in order to reach this final goal where life casts aside the burdens of its toil,” October 8, 1891. ((“Beautiful Riverside,” (Appleton) Appleton Weekly Post, 8 Oct 1891, Thursday, p. 1, col. 4))

I love newspapers. What I love about newspapers is the stories that I find. Not only as they pertain to my family, but to the communities in which they lived. I am in the process of taking my research paperless. Anything that is easily replaced or available online is being digitally attached to my Legacy Family Tree database. In my purge, I have re-discovered two articles that were editorials aimed at the trustees of Riverside Cemetery. The cemetery is located in Appleton, Outagamie, Wisconsin.

Here is a brief glimpse of the history of Riverside Cemetery. The cemetery was founded in 1870 by Joseph E. Harriman, but it wasn’t until 1872 that the Appleton Cemetery Association was formed to take charge and make it a reality. The need for a new cemetery was great, as the original city cemetery founded in 1850 was located in downtown Appleton, sat on poor soil, and allowed no room for expansion. This cemetery was located on what is now known as the Post-Crescent block. In those days Franklin Street was known as Fisk Street, and Washington Street was known as Edwards, but the block is still recognizable. 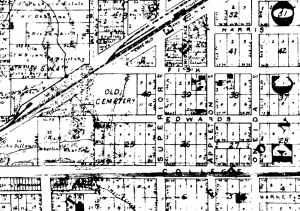 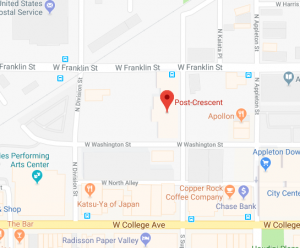 In October 1891, there was more on the mind of the Appleton Weekly Post’s editor, E. P. Humphrey, than the beautiful grounds of the cemetery. While he had been ‘rambling through our beautiful city of the dead,” “admiring its sylvan beauty,” it “occurred” to him that there was an important piece that was missing from the cemetery, “a vault capable of offering accommodation for the temporary keeping of the dead.” He felt that this was much needed as a “place to hold the dead while it was impossible to excavate a grave in the middle of winter, or if the family wished to wait till family living far away could return home.” Or in “instances when doubt is entertained as to whether life is really extinct in persons we regard as dead. What a boon to place such in a vault until the living are absolutely positive that their loved ones are not interred alive.” He goes on to tell this story, which I feel is what touched his heart, and was the reason for writing this editorial: “But a short time ago it happened that a child in this city died of diphtheria at 11 o’clock in the morning and at 2 o’clock the same day that child was buried. No matter how contagious a disease may be, there is not a mother on the face of the earth but would object to such heartless, inhuman proceedings. It is against human nature, and could have been avoided if there had been a vault to receive the body of that mother’s darling and the funeral taken place, as is the custom, three days after death.” While he implored, “have the trustees of the Riverside Cemetery Association ever thought of this matter? Is it not about time some thing in this line was undertaken?” it was not until 1910 that the large stone entrance to the cemetery was constructed. The entrance includes a chapel, office space and winter storage for bodies, from the time when it was impossible to excavate a gravesite in winter. ((“Beautiful Riverside, p. 1, col. 4))

A year later,  on September 10, 1892, one of the Ryan brothers, James or Samuel, editors and proprietors of The Crescent, was enjoying a walk through the cemetery, and felt compelled to write an editorial about what he had experienced. He reported that “the walks and drives are free from every thing that would be unpleasant, the grass is clean shaven and the trees and shrubs neatly trimmed, the mounds of flowers look beautiful, and the graves kept in good condition.” In the north part of the cemetery “tile under-draining” had been installed, thus allowing for “many new and cheaper lots” to be sold at prices ranging from $25 to $35. The greenhouse that had been erected in 1877 was yielding a “handsome income.” His one complaint, and the reason for the editorial, was to ask the common council to “contract with the Riverside board of trustees to remove all the remains from the old cemetery, and get rid of that blot upon the fair fame of this city.”He concluded his editorial with this statement, “All the people will rejoice over its accomplishment.” ((“Riverside Cemetery,” (Appleton) The Crescent, 10 Sep 1892, p. 2, col. 3)) According to the History page of the cemetery, www.riversidecemeteryappleton.com, all of the bodies from the original city cemetery were to have been moved by 1884, but unfortunately bones were still being discovered as late as the 1930s.

Riverside Cemetery has grown to nearly ninety acres of beautiful landscape overlooking the Fox River. It not only shelters our city’s dead, but has always been a welcome place for a Sunday stroll. The large trees have been labeled, and on any given day, you can find students wandering the paths, looking for leaves to finish a school or scout project. 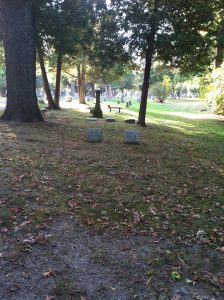 When we visit, we start at the large stone entrance, and make our way east along the river, strolling past a Cook cousin, Leslie Lloyd and his wife, Winnefred Cook. Then we follow the path north to the main lane and into St. Joseph Cemetery, where many family members are buried. St. Joseph Cemetery was founded in 1878, and has 25 acres of developed land, and 12 acres of undeveloped land. With over 127 acres of shaded paths overlooking the river to meander through, it is the perfect place to spend an afternoon. Among “those dear to our hearts who now live but in our memories, and rest enshrinek in those boundaries.”