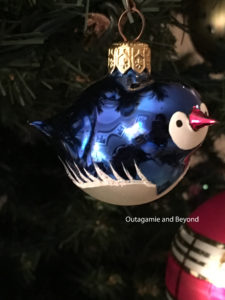 Marie had been experiencing some pretty intense pain in her back, and it was felt by her doctors here in Appleton that she should be examined at the Mayo Clinic with the hope that they could help her.

Appointments were scheduled for December 3-4, and 9-10. I believe we were able to re-schedule the 9-10 appointments, as I know we were not there over the weekend – and most importantly in Rochester for Butch’s birthday on the 8th. The next decision to be made, was Butch, who was just about to turn 84, up to the task of making the drive in unpredictable December weather? I don’t remember how the decision was made, but I was appointed chief driver, and appointment monitor, while Gary stayed at home wrangling our 7 1/2 year old daughter, 4 year old son, and continued to work full time.

We left on Monday, December 2nd, and as I recall the drive to Rochester was uneventful. Marie sat in front with me, and Butch sat in the back seat of his Lincoln Town Car, taking in the rare view from rear seat of his car.

Marie’s appointment schedule was not heavy, and while tests were time consuming, we found time to wander the Apache Mall, and do a bit of Christmas shopping. We also enjoyed having dinner like “old people” at a restaurant that served a cheap, early bird menu. Eating at 4:30 was perfect, as we were always starving by this time of day. Time for real meals were few and far between due to the doctor appointments. Butch thought that fact that we were eating this early was doubly funny. Here we were laughing about eating with the old people, when, well, he was old! 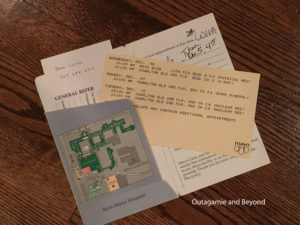 It’s funny, I thought I remembered this trip so clearly, but in reality, it is a series of highlights. One doctor appointment in particular sticks out. Marie was asked to reach as far as she could toward the floor. She promptly complied, bending in 1/2 and laying her palms flat on the floor. The doctor almost fell of his stool. He was not expecting this from a 74 year old woman, who was there to see him for chronic back pain.

As the appointments ended and we prepared to return home, the weather took a turn. Marie and I headed out that evening to get gas so we wouldn’t have to do it the next day. Neither of us had filled up the Town Car before, and we stood laughing in the snow, trying to figure out how to open the fuel door. We finally got out the manual, figured it out and pumped our gas.

The weather had further deteriorated the by next morning, when we headed cautiously out for home. Approaching a stop light, just turning green, a car decided to make a mad left turn in front of us. I held tight, and pushed on the brakes. From the seat next to me was heard “Sh*$T!” while in the back seat, “DA*@&#N” as an involuntary “F#()#@@K” came out of my mouth. Luckily the breaks held, the car stopped, and we didn’t hit anything, and nothing hit us!

As the snow continued to fall, we made our way east on what is mostly two lane state highways. At one point, it became clear that I was going to have to pass a semi who was being extra cautious. Finding my moment I headed out and around, holding the car to the road as we hit the slush and snow. The comment from the back seat. “I always knew you were a good driver!” Reaching Oshkosh though, Butch had had enough. He needed a break, and a meal. OH! We were so close to home. But we stopped and had a quick bite to eat before getting back on the road and on our way to Hollandtown.

Unfortunately the trip to Mayo brought no miracle relief for Marie. She was given meditation tapes, some new medications to try, along with some exercises. Ultimately she learned that she needed to slow down a bit, take care of herself, and when it came to housecleaning, she didn’t need to throw the sofa across the family room all by herself, she could ask for help.

Each year as I put this special little blue bird on the Christmas tree, I think of this trip, the laughter, and even the fear of what the doctors may find. And this year, like I have for the past three years, a second blue bird is hung on our tree. They now hang in the same household. And I want everyone to know it.