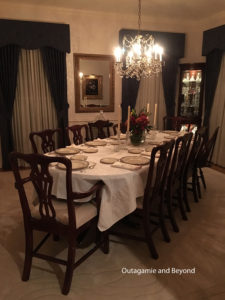 The day after Thanksgiving allows me the time to sit and reflect. The food has been prepared and consumed, the dishes done, the house is quiet. Yesterday marked 30 years of Thanksgivings that Gary and I have spent together. The way we celebrate the holiday has certainly changed over these many years – three decades!

29 years ago I spent the day at my new in-laws home. In those days it was a dress up occasion, complete with pantyhose and heels. My mother-in-law roasted her turkey in a Nesco so that she could free her oven for the rest of the meal. Feeling a bit useless as the meal was getting on the table, I wandered into the utility room where my father-in-law was carving the turkey. I have no idea what we talked about, but as I stood there watching him, I snitched a piece of skin. He looked at me, snuck a peak into the kitchen, and helped himself to this forbidden treat. As partners in crime, he continued carving the bird, and we brought it to the table.

1989 was the first year that I prepared the meal. My daughter was almost six months old. One of the traditional sides for my side of the family was a sweet potato dish that my grandmother made, a take on the stereotypical sweet potato side. That year using canned sweet potatoes, and baking them in a toaster oven, I added butter and brown sugar to the dish, and then took it into the living room to see how I had done. Bringing the casserole dish to grandma, i asked her if there was enough butter and sugar. More sugar, she said. So I headed back into the kitchen to add additional sugar. Then headed back to the living room. This back and forth went on a few more times, until she felt that I had the correct amount of sugar added to the potatoes.

1990 was celebrated at my sister-in-laws. Knowing that Marie would have prepared pies and other things to bring for the meal, we stopped at the house on to see if we could help with anything. Butch happily greeted Kate at the door, and had to put her up on the counter to have a look at her. As she had only been walking a few months, she was still a bit unsteady on her feet, and she promptly sat down on a pumpkin pie. Thankfully, for both the pie and her coat, the pie was wrapped in plastic wrap.

In 1993 we had grand plans to host Thanksgiving here in our “new” house. But the summer rains held us up, and when Thanksgiving rolled around, the house was not ready for hosting. It was barely ready for our family consisting of a four year old, and a one year old who had decided to learn to walk the week before we moved in on November 19th. Without real clearance from the city, and with workmen arriving every day at 7:00 a.m., we were in no position to host. In fact, the house was barely ready for Christmas!

The 90s were filled with big family gatherings around our table, as girlfriends, and an occasional boyfriend joined us along with Gary’s older brother and his family. Many times my parents joined with the Fassbenders at the table, swelling the seating arrangement to 20. My dad bonding with Butch’s older sister, and Gary’s godmother over the “joys” of taking prednisone. Or conversations about a dream of traveling to Australia with a favorite nephew. It was during these years that I started to cook two turkeys instead of one large bird. That way there was plenty of dark meat to go around. Thanksgiving day Marie would arrive with a large casserole of her famous stuffing. A bread concoction that she spent days making as it required dry bread, chicken, ground beef, celery, onion, and an apple ground in the meat grinder, and then mixed together with sage, poultry seasoning, salt, pepper, and three eggs, and the reserved cooking liquid from the chicken. My mothers, also famous, wild rice stuffing, also a bread stuffing, but using fresh bread combined with celery, onion, sage, thyme and five eggs – and we can’t forget the three sticks of butter in which you sautéed the onion and celery, filled the cavity of the birds. Tapper Salad fulfilled the role of a sweet side. An old family recipe of marshmallows, Queen Anne cherries, pineapple, and whipping cream. Marie taught me how to make jellied cranberry sauce. Having only made whole cranberry sauce up to this point, she told me to strain the sauce, put it back in the pan, add an additional cup of sugar and boil for another 15 minutes. Voila! The table in those years groaned with homemade goodness.

The new century brought another change as family dynamics changed, in addition to losing both Gary’s dad, and then my father So our table shrunk to six. Then to five when we lost Gary’s mother. This year we were a joyful ten as Gary’s nephew and his family joined us. The table has a different look these days. While the two stuffings/dressings are a constant, our tastes have changed. I no longer make the Tapper Salad. The marshmallows you can purchase in the stores today are just too sweet, and it pains me to spend $10 on canned cherries when we were not really enjoying it anymore. I plan on making homemade marshmallows and trying it again – maybe a 1/2 recipe. As for my grandma’s sweet potatoes, this year I roasted the sweet potatoes to a natural sweetness, and if you wanted a little extra, we put brown sugar on the table for sprinkling. And i put bourbon in the pumpkin pie.

What hasn’t changed is the blessings of family, and the joy of spending time together around the table. Not only on Thanksgiving, but every night that we are together. This time at table is just what our family does. It makes us who we are. A family sharing the blessings of being together and sharing a meal.