The news that the Ringling Brothers Barnum and Bailey Circus would be shutting down after 146 years, reminded me of this story. 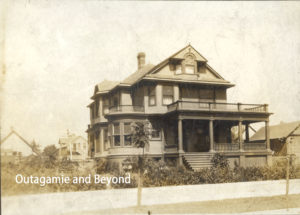 The Tapper home on Ann Street. The garage is just visible on the right.

One year while visiting my grandparents in Hammond, Lake County, Indiana, my brother and I went with our grandfather, Roland Tapper, to run some errands. We must have driven near where the family home used to stand on Ann Street, as it triggered a memory for Grandpa, and he told us that his father used to house the circus elephants in their garage. Sadly, that is where my memory of this conversation ends, but the story stuck with me.

Anton H. Tapper Sr. moved into his new home on Ann Street, in August 1908.1 Anton had chosen property directly across the street from the new Masonic Temple, whose cornerstone was laid May 1, 1907. The three story red brick building was built in the Gothic style, and boasted 65,000 square feet of space, which included an auditorium large enough to host a circus. Sadly the temple was torn down in 2009, having been abandoned by the Masons in 1999. Time and a leaking roof had taken its toll. Pictures of the temple at the time it was torn down are available online here: http://www.flickriver.com/photos/jordannicolette/sets/72157620768953484/ 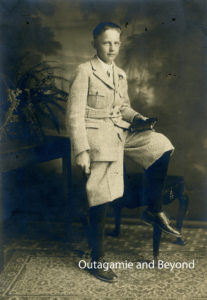 In November 1922, when my grandfather was 13 years old, the Shrine Circus came to town, and set up in the Masonic Temple. The circus was held Wednesday, November 8th through Saturday, November 18th. Two performances were held daily, one at 1:30, and the second at 7:00 p.m. Amazingly this full circus was held inside in the temple’s auditorium! The “regular thirty foot circus ring, with dirt foundation and sawdust, [was set up] just like it’s under the big canvas top.” “The ring was laid out on the floor in front of the auditorium stage. [Pictures of the auditorium are included in the link above]. The seats which used to be there have been removed and circus seats put on the stage. First a heavy plank flooring was laid. It was covered with tar paper. Then tons of clay were packed on this foundation until a firm surface had been provided on which the elephants will perform and the galloping horses cavort.”2

The elephants arrived Monday, and after a quick tour through downtown, were enlisted to help pack down the clay that had been laid in the circus ring. That evening, they moved to their evening quarters in “Tony Tapper’s garage.”3 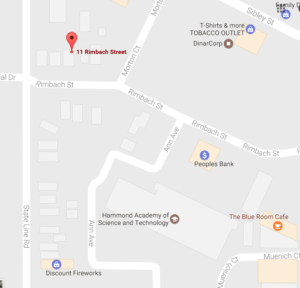 The Masonic Temple was located where the Hammond Academy now sits.

As if the circus being in town was not exciting enough for the children of Hammond, Tilly the elephant celebrated her 107th birthday on November 11th, and they were invited to her birthday party. In 1922, 11-year-old  Margaret Hagedorn was in sixth grade. She was living in her grandmother’s household with her mother, and 10 year old sister ,at 11 Rimbach Street. As girls of that age often do, she wrote about Tilly’s birthday party, and her account was published in The Times on November 20, 1922.4

So while I don’t have a first hand account of this time from my grandfather, I do have Margarets memories. She states that “Such a party I never expect to witness again and I am writing this out so that I can always remember it as I believe I will never go to a party quite like it again.”

“The elephants were quartered in Mr. Tapper’s barn, which is just across from the Masonic Temple, and as we live less than a block from there we became very well acquainted with the elephants and their keepers and we used to visit them several times a day. The keepers were kindly men and told us many interesting things about these wonderful beasts.”5

If Margaret was visiting the elephants several times a day, and was tolerated by the keepers who were “kindly men,” I can only imagine that my grandfather was also spending time in his father’s garage with the elephants. After running our errands, and returning to the apartment that day many years ago, Grandpa continued reminiscing about the circus, and told the story that he and his brothers had fun taking the elephant, umm droppings, and throwing them around the yard. Which brings to mind what a mess four elephants must have left behind. 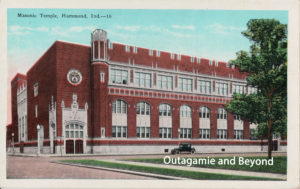 The Masonic Temple, circa 1921

The highlight of the circus was celebrating Tilly’s birthday, and thankfully Margaret wrote about the party in detail. She described the table that was placed in the center of the ring and covered with a white cloth, and where “good crisp cabbages cut in halves and loaves of bread” were placed. On a separate table was placed the cake. “Such a cake!!!. It was five feet across and made in tiers thickly frosted in white with festoons of chocolate and pink frosting.” She was amazed at how the elephants, Tilly, Clara, Tony and Pitt, sat “down on tubs in front of the table just like human beings at a feast,” and waited for a signal from the keepers before beginning to eat. When they had finished the first coarse, the cake was cut into large pieces. Margaret’s favorite memory was how the elephants ate their piece of cake. She writes: “Each elephant was given large share [of cake]. Tilly, Clara and Tony behaved very nicely and lifted their piece of cake with their trunks to their mouths, but old Pitt opened his mouth wide and acted as though he expected to have the whole cake shoved in.”6

What a party this must have been! What an exciting ten days it must have been for the children of Hammond! And what a smell must have been left behind in the Tapper garage when the elephants got back on the train, and headed to the next city. I am grateful that Margaret wrote about the event “so that she would remember this occasion always.”