Yesterday was National Grilled Cheese Day – who thinks of these things? So I am bit behind with a cheese story, it’s a big one! And the Fassbender family was involved.

Quoted from A Snapshot: Peter Joseph Hubert Fassbender 1] “…in 1911, plans were well under way for Nicholas Simon of Appleton to attempt to beat his own record for creating a giant cheese. In 1910 he had built a 4,000 pound cheese for the National Dairy Show in Chicago. For the 1911 National Dairy Show, to be held October 26-November 4, he was awarded the contract by the National Dairy Show Association to build a 12,000 lb. Wisconsin white cheese [cheddar]. The cheese was not to be made as a money-making proposition, but for educational purposes. On July 26, 1911, preliminary work began on the construction of the hoop and platform to hold the cheese. The giant hoop of galvanized iron was eight feet in diameter, and five feet high. ‘Twelve heavy steel bands, 24 feet long, were placed around the hoop to make it withstand the enormous pressure obtained by the immense jack-screws placed on the ends, or “followers,” and pressing agains the frame. Four heavy oak timbers below the hoop and as many above, bound together by twenty heavy steel bolts five feet long, formed the frame that was built upon the lines of the old style upright screw press. The “followers” or ends, were four thicknesses of two-inch oak boards, or eight inches thick. The hoop alone weighed 3,000 pounds.” 2]

Both Hubert [Fassbender] and Henry [Fassbender] played a role in creating this cheese, which occurred on Tuesday, August 15, 1911. Henry was one of the 18 expert cheesemakers, who with the assistance of 22 experienced helpers manufactured the cheese, and Hubert is credited with being one of the dairies supplying the milk. ‘…All the milk from over 8,000 cows for one day, and furnished by over 1,300 farmers of Outagamie county, went into the giant cheese. The curd was furnished by thirty-two of the most up-to-date and sanitary cheese factories…it took over 1,600 meant to do the milking, and 144,100 pounds of milk, over seventy-two tons or over 18,000 gallons of the richest and purest milk obtainable from the finest registered Holstein, Guernsey and other breed cows in the country, was put into the cheese or was required to produce the curd.’ ‘In addition…it took over 480 pounds of Wyandotte salt and thirty-one pounds of Marschall rennet extract to produce the curd, but not an ounce of coloring was placed in the cheese.’ 3]  The 8,000 cows all ‘had to be milked at the same hour. The milk had to be cooled at the same temperature, and the…factories which manufactured the curd had to follow the same process to make the curd uniform.’ 4]

On October 30, 1911, President William Howard Taft attended the National Dairy Show where he gave a ‘pleasant speech’ and toured the exhibits. Upon reaching the ‘immense cheese which [was] a feature of the show he was given a huge knife and invited to have a slice. He accepted laughingly, cut off a sample of the cheese and at it with relish.’ 5]  After tasting the cheese he said ‘I would like to meet the man who made it.’ Upon being introduced to Nicholas Simon, he complimented him by saying he had never tasted better cream cheese. The giant cheese which cost an estimated $5,0000-$6,000 to produce, was sold to the Fair Store in Chicago, where it was sold at retail, Nicholas Simon receiving thirty cents per pound, or $3,7089.10. 6] Ten pounds of the cheese was shipped to President Taft, arriving in time for Thanksgiving dinner, a gift from Nicholas Simon.” 7] 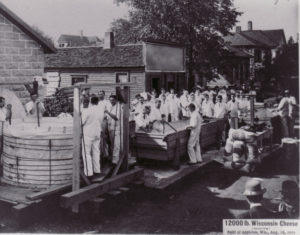 The Largest Cheese in the World! It is Eight Feet in Diameter and Weighs Over Five Tons. Henry Fassbender is the second man from the left. Location is unknown, possibly 741 Pacific Street.

“No building in Appleton was large enough for the manufacture and care of the cheese and it was made in the open air. The hoop was placed on a platform in front of six big vats, 15 feet long, 4 1/2 feet wide and 22 1/2 feet deep, in which the curd was washed and mixed.

Under the supervision of the State Dairy and Food Commissioner, 2 3/4 pounds of salt were used to each 100 pounds of curd, and when the salt was thoroughly mixed with the curd it was carried in pails to the form or hoop, where it was packed with heavy iron tampers, which were wrapped with [40 yards of] cheesecloth.

It took five hours to manufacture the cheese after the curd was delivered, and so solidly had it been packed that it pressed down but a few inches under the enormous pressure. Two days later the cheese was trimmed, the bandage of heavy cotton cheese cloth, which fitted the form like a glove was carried over the top and the gigantic cheese was moved into a warehouse by a house mover…it was impossible to find a cold-storage plant…in which it could be stored to ‘cure,’ and it was necessary to build a special refrigerator, 12 by 15 feet, about [the cheese.] A specially equipped flat car was provided to ship it to Chicago.”

This was not the last giant cheese that Nicholas Simon produced, but it is his most famous.