Or to paraphrase Donkey: Cake! Cake has layers. Everybody likes cake! 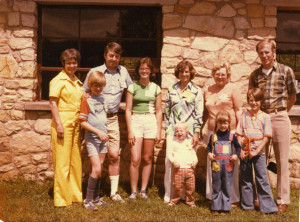 Growing up I really only thought of the Cooks as my paternal grandmother’s family. This meant attending the Cook Family Reunion in the summer, it meant that I was included in the Cook Book, the genealogical story of the family. It was grandma pointing to the Cook monument in Oak Hill Cemetery as we drove past. Funny, I can vividly recall being able to spot the stone from the road, but do not recall ever entering the cemetery to actually look at it. And of course, it meant that we thought it was kind of cool to have the family name on the S. A. Cook Armory in Neenah, Winnebago County. And of course it was the story of the Lady Elgin tragedy and the loss of the matriarch, Jane McGarvy Cook and her eldest daughter, Elizabeth, but the survival of son, Jacob Harrison.

As I grew older, and my father delved into the life of Samuel Andrew Cook, S. A. for short, I realized that the Cook family was more than this. Much more. Layers upon layers of “more.”

As dad studied S. A., I took a look at the Civil War pension papers that my mother had ordered, and received. I became fascinated by S. A.’s older brother, Jacob Harrison. His passionate plea asking for leaves of absence to head back to Stockbridge, Calumet County, to check on his younger brother’s and sister (one of the brothers being my great-great grandfather), made me want to know more about him. This beginning study was chronicled in my 2006 self published snapshot. A Snapshot: Jacob Harrison Cook .

What I have learned since finishing this snapshot, is that the Cooks are pushy people. They jump into my research as I work on other projects. They won’t be ignored. Case in point are the two items that I will lay out below – but need to finish other things before delving back into what this means.

Jacob H. Cook moved to Appleton, Outagamie, Wisconsin in May 1883. As he had in all of the communities he had lived in previously, he jumped right in and became more than just the newest pharmacist in town. Among other things he served for many years as a Justice of the Peace, his name appearing on many marriage licenses. Maybe this explains the two land “stories” I will share below. I still have to noodle through the legalese and meaning.

Telling the tale in reverse order of discovery, is a piece of land now known as 932 North Richmond Street.

According to the city of Appleton, the house that sits on this lot dates to 1900. The deeds that I am looking at, are dated six years prior to 1900, so I am assuming that they refer to the land only.

What I find fascinating about this purchase, is that the deed for this property is a Quit Claim Deed, and goes on to state: “…he being the assignee of a certain land contract dated Feby 12′ 1886 between Welcome Hyde and Alfred K. Brainerd Jr.” Meaning that Hyde and Brainerd had relinquished their rights to a piece of property, giving all rights to Jacob. The sum of the purchase was $147.00.

The next find is even more puzzling, and is really more about the people than the land. This was the first land record that Jacob pushed into my face. As I worked to satisfy my curiosity about the Fassbender property on State Street, which I talked about in the post A Closer Look at the Map, I was scanning the index in the letter “C,” and the phrase “J. H. Cook, guardian” popped out at me. Curious, I opened the volume and looked at the record, which was dated May 1, 1888, I read: “To all to whom these Presents shall Come, I Jacob H. Cook of Appleton in the County of Outagamie State of Wisconsin Guardian of Maria Brown Insane…” ((“Wisconsin, Outagamie County Records, 1825-1980,” images, FamilySearch (https://familysearch.org/pal:/MM9.3.1/TH-1951-22094-8461-98?cc=1463639 : accessed 6 April 2016), Land and Property > Deed record, 1882-1913, vol. 59 > image 34 of 485; Outagamie County Courthouse, Appleton.)) 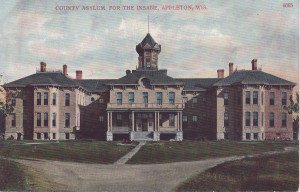 County Asylum for the Insane

Who was this woman, and why would Jacob have been appointed her guardian? I did a quick search, and learned that her husband had been in the Civil War, and was a charter member of the local GAR Post along with Jacob. He passed away from paralysis in the Veteran’s Home in Waupaca, Waupaca County, in 1893. The couple had grown children living here in Appleton at the time, yet in 1888 poor Maria had already been declared insane, and Jacob her guardian. The census confirms that Maria spent the remaining years of her life first in the Appleton Insane Asylum, and later in the Outagamie County Asylum. She passed away in 1904, cause, old age.

Layers. Whether we are talking about onions or cake, there is always another layer, another unexpected facet of the Cook family to learn about and to explore.

Next stop. The Outagamie County Courthouse to see if I can learn more about guardianship for the insane in the late 1880s, and why would Jacob have been an assignee for the property on Richmond Street. But first, sorry Jacob, I have another project to finish.