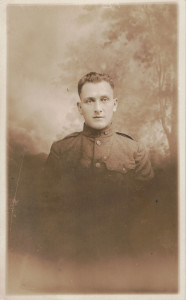 I was surprised to discover that there is very little published on the web about the regiments of World War I. I guess that I have gotten so used to the vast amount of information that is published about the Civil War, from regiment listings, to battles that these regiments fought in, etc. Information is easy to come by, and amazingly detailed in its content.

As I prepared to archive images of William Patrick Campbell (Bill) in his World War I uniform, I decided to do a “quick” search to see if I could discover what regiment he was in, what years he served, and the important details of when did he enlist, and when was he mustered out. No such luck.

But there does seem to be a movement towards creating online content. The Wisconsin Veterans Museum in Madison, Wisconsin, is in the process of creating an online searchable database of our World War I veterans. Another site that is honoring the veterans of Calumet County, is the Chilton Veterans site. The site is: “…operated for the sole purpose of honoring veterans from all branches of service who honorably served the nation during their lifetimes.” In August 2014, a Veteran’s Memorial designed by James P “Jim” Suttner, was dedicated, and they will continue to add names to the memorial on a yearly basis. Something I should look into as a way to honor the Civil War veterans in my Cook family. I also found this site interesting: The Mobilization of the Wisconsin National Guard During World War I. 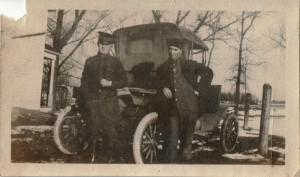 We know that William served, as he sent home an image of himself, which was taken by “Liberty Studio, Camp Mills, Hempstead, L. I” [Long Island]. The image was stamped with the Liberty Studio listing, but undated. Wikipedia ((https://en.wikipedia.org/wiki/Camp_Mills; accessed 24 Jan 2016.)) has this to say about Camp Mills. It was set up as a place of preparation of Army units, prior to being deployed to Europe. It opened as a temporary tent camp in September 1917, and closed in November, after preparing the 42nd and 41st Divisions. It re-opened, April 4, 1918, as a part of the New York Port of Embarkation for the 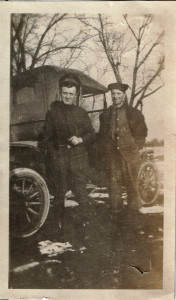 troops on their way to Europe. At the end of the war in November 1918, it assisted in the reverse process, acting as a demobilization center, as thousands of troops poured back into the United States.

It would seem as though William returned home at the end of the war, as the family archive contains these two images of him with his brother, Walter, on the drive next to the farmhouse. Snow is seen in the background, and Walter appears to be bundled up. November, early December would make sense because of the snow, and the occasion of his return celebrated with a photograph.

Upon his return, he stayed in Calumet County for a few years, working as a farm hand on the family farm. By 1926, he was living and working in Milwaukee, Wisconsin as a fireman. He held this position for the rest of his working days, working in the the repair shop of the engine house.

This image from the Library of Congress, celebrates the September 20, 1919 homecoming of many of the soldiers who had been off to war. Surviving Civil War veterans are standing at the left of the larger returning WWI veterans.