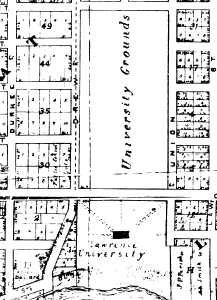 Writing two posts in a row that referenced the John Stephens 1872 Map of the City of Appleton, I found myself surprised at how different the city looked over the span of the few blocks between the addresses that I was studying. Looking at the map of the first address, the Jacob Harrison Cook home on Drew Street, the neighborhood looks much as it does today, recognizable at least. And this would make sense as it was located close to Lawrence University, which was founded in 1847, just as the city was being settled. Appleton would not incorporate as a village until 1853, and as a city until 1857. The biggest change that would occur near Jacob’s home  in Block 35, Lot 5, is that the University Grounds would be broken up, streets would run through it, and City Park would be established in 1882. But this neighborhood 144 years later, is recognizable. A few blocks to the west, the view of the city is very different, still wild, and not heavily inhabited. Lot 14 in Section 26 of the John Stephens 1872 map changed greatly over the years. And I find it fascinating, and frustrating. I realized that in order to truly understand the property as it changed from 1872 till 1901, I needed to start with the basics, the plat map showing the Township and Range, in this case the SW 1/4 of the NW 1/4 of Township 21 and Range 17, Section 26. See the map below with all my red markings. 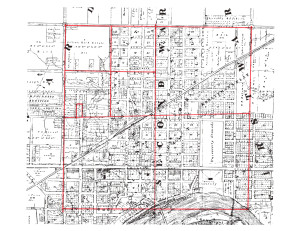 On September 25, 1882, a Sheriff’s Certificate was filed in Outagamie County, for the sale of the above named land to Gustave Zuehlke. I have been unable to locate the actual deed in the records online at FamilySearch.org, but it is referenced in the Quit Claim Deed filed December 9, 1882, when he sold the land to Christina Gross for $128.00.1 A Quit Claim Deed is usually filed between family members, yet a quick search on Ancestry.com for Christina Gross, only told me that she was 53 years old in 1880, and lived on Packard Street, which is the street that runs below Lot 14. I am not sure if she is related to Gustave Zuehlke. 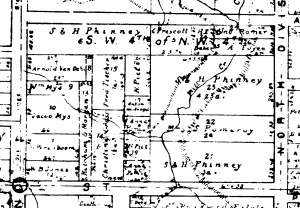 Continuing my search for the next sale, I was surprised to discover a Warranty Deed for Lot 14 with an earlier date, March 13, 1882.2  In this sale, Christina, along with her husband Mathias sold to Lewis Albrecht the North 246 feet of the lot, for $600.00. With this sale, the large lot that measured 162 feet fronting Packard, and 495 feet along State Street, was starting to be divided and developed. 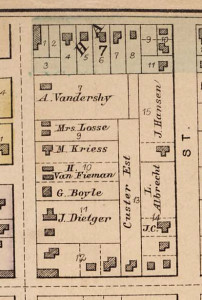 Two years later, State Street had continued north along the edge of Lot 14, and so the lot was reduced by approximately 38 feet, leaving a depth of 123.19 feet. It was at this time that Lewis, his wife Christine, Christina Gross and her husband Mathias, sold the North 60 feet of the South 180 feet of the lot. The purchaser, J. W. Corter, paid $350.00 for this small piece of land. The description of the sale makes me feel that I have missed a sale somewhere, as the numbers don’t add up, but this cropped image from an 1889 map, clearly shows the land that the Albrecht’s owned, and the smaller parcel that belonged to Corter. Time to get confused again, as on May 29, 1893, Mathias and his wife Christina Gross sold ALL of Lot 14 excepting the South 240 feet, and the parcel dedicated to State Street to B. W. Robeling for $500.00.3  Robeling in turn sold the North 60 feet of the South 300 feet to Peter Miller on September 18, 1893 for $475.00.4 He in turn sold this exact land description, including a house to Peter Fassbinder [sic] on April 17, 1901, for $1,600.00.5  The block would continue to change in appearance over the next few years, but has now become recognizable as we see it in 2016. These two maps, Assessor Maps, one from 1900 and the other dated 1907 show the final changes. By 1907 Peter’s lot was known as Number 5, and the current description of this lot today reads: “FIFTH WARD PLAT 5WD N7FT OF LOT 4 AND ALL OF LOT 5 BLK 17” Peter’s grandson, Arthur Ellenbecker, and owner of his grandfather’s home until his death in 2003, 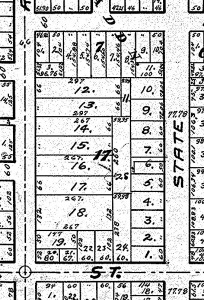 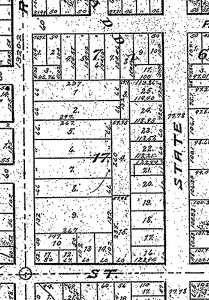 explained that his aunt, Anna Fassbender, had purchased the home on Lot 4 to use for her dressmaking business. When Peter decided to build a garage, he took this small parcel so as to make a proper driveway, and a better placement for the freestanding garage. Appleton.org produces nice maps of neighborhoods, and includes interesting facts about the homes here in Appleton. This is how the block looks today, in 2016. On this map it is very easy to see how the garage sits right on the property line. According to this site, the home has once again been converted back into a single family home, from the duplex that it was in 1999 when I took this picture, and when I first visited with Arthur. 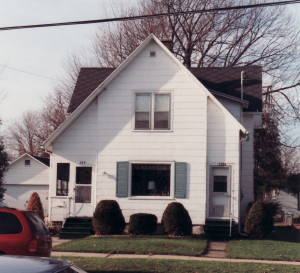 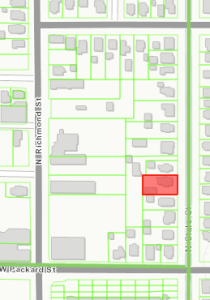 I am still amazed at how complicated buying and selling city property was in the late 1800s. I know that I am missing some of the buying and selling of Lot 14. The numbers just don’t add up. So in reality a stop at the courthouse is in order. But I don’t regret the exercise that I tasked myself with, of using the un-indexed records found on FamilySearch.org to learn more about the land and home that would shelter Fassbenders for over 100 years, from 1901 until 2003.