We have attended two funerals this month, both for men gone too soon. Reading through the obituary at the end is the usual statement: “A memorial has been established in his name.” We all want our loved ones to be remembered. As a genealogist, remembering is what I do, and I am working to write about the lives of these family members gone, but not forgotten.

When my father, Robert (Bob) Sternitzky, passed away in 2005, my mother wanted to do something in his memory. “A memorial has been established in his name.” The memorial. I realized that as part of my Library of Artifacts page, I should include these memorials. I will start with my dad.

As I have stated before, Samuel Andrew Cook was the Cook that fascinated my father. He spent years researching him, and documenting his story. One of my father’s “pet” projects was to support Cook Park, a park on Doty Island, located near where S. A.’s home once stood. William E. Dunwiddle wrote about how Cook Park came to be a park, in his book: The Parks of Neenah: An Historical Interpretation.

In 1997 it was determined that Cook Park needed to update its playground equipment. The park became one of four parks participating in the “Buy a Brick. Build a Dream” program sponsored by the Kimberly-Clark Community Playground Project. Each brick cost $30.00, and was engraved with your name, or the name of someone you wanted to honor. My father took on, as his mission, the task of filling Cook Park with the names of Cook relatives. He brought the program to the Cook Reunion that year, and worked to spread the word. At the end of the campaign, Cook Park had new playground equipment, and 161 engraved bricks were set in place. 61 of these bricks honored Cook family members. Dad commemorated this accomplishment by photographing the bricks while standing on a ladder overlooking the bricks; and the park, from the open window of a friend’s Cessna 172, flying at 1300 feet and 75 mph.

In 1996, the year before the brick project, a planter had been created in Cook Park, and the front of the box facing the street was formed by the giant “S. A. Cook” concrete piece that once graced the top peak of the S. A. Cook Armory. The armory had been torn down in the late 1980s, and thankfully this piece had been saved, and is now preserved in the park named for him. 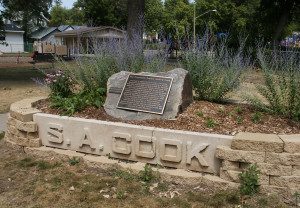 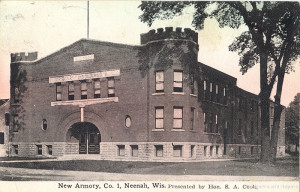 When my dad passed away in 2005, mom wanted to create a memorial that would be placed in Cook Park to honor both my dad and his great granduncle, Samuel Andrew Cook. She worked closely with the Neenah Parks and Recreation department to decide how best to do this, one idea was to place a bench in the park with a plaque bearing dad’s name. One thing that was missing from this park, was information telling the visitor WHO S. A. Cook was, and why would a park be named for him. And in that question came the answer.

A large rock was placed in the garden bed, and attached to this rock is a brass plaque telling the story of S. A., and a smaller plaque honoring my father. My mother wrote the history with input by me, and edited by my brother. 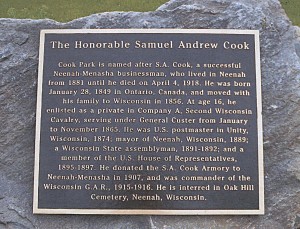 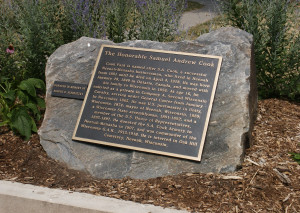 The plaques in place 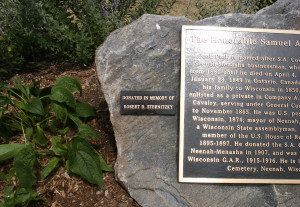 This story is fully commemorated in my dad’s “Report” created for the Cook family members who supported the brick project. It was privately published in December 2005 as “The Bricks of Cook Park. A Modern History.” The introduction written by my father reads:

“This is not the story of S. A. Cook who was a U. S. postmaster, a mayor, a state assemblyman, a U. S. congressman, a successful businessman. This is the story of the park named for him and the combined efforts of family and friends to fund a patio of bricks engraved with the names of his grandfather, his parents, his siblings, his two wives, his three children and his grandson–plus people I call mother, uncle, aunt, child, grandchild and cousin–many cousins!”