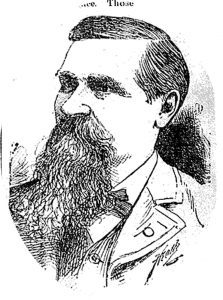 The sinking of the Lady Elgin changed the Cook family forever.  Both family-wise with the loss of Jane and her daughter, Elizabeth Ann, and financially. The long awaited money from the sale of property in Canada was lost. There are many versions to be found both in print and online of what happened that night. So for this post I am going to let Jacob tell the story in his own words. As the anniversary approached in 1892, the Milwaukee Sentinel interviewed some of the remaining survivors, and sent an artist to capture their likeness to be published along with their memories. The article was published 4 Sep 1892.

Jacob was 51 years old the day he was interviewed on September 2nd, his story titled “An Appleton Man’s Escape. His Mother and Sister Were Both Lost–The Former’s Body Never Recovered.” reads:

“During the summer of 1860, while returning from an Eastern trip, my mother, my sister Libbie and I, together with twelve others, took passage on a propeller from Collingwood, Ont., to Milwaukee. We arrived near Milwaukee in the night, and it was so cloudy and dark that the captain thought it would not be safe to attempt to land so we continued on to Chicago, where we transferred to the first boat leaving for Milwaukee. That was the fated Lady Elgin, just about to return with more than 400 Milwaukee excursionists. Of the fifteen transferred only two reached Milwaukee. There was music and dancing on the boat, and it was about 1 o’clock in the morning when our party exchanged ‘good night’ and prepared to retire. Before I reached my room, the schooner and steamer collided with such force as to throw me off my feet. The schooner was bound for Chicago with a heavy cargo of lumber from further north, and it is the cause for much wonder among those acquainted with the circumstance, why it did not try to save the passengers of the Lady Elgin by at least throwing over some of the lumber. As it was, however, as soon as they could clear away from the wreck, they pushed on, with all possible speed, to Chicago, thinking, as the captain said they themselves had sustained serious injury. Be that as it may, my first impression, when the crash came, and we could see the bright lights and heavy jib-boom of the schooner looming up over us, was that the boat must have been struck by lightening.

We soon heard calls to throw down bedding and mattresses to stop the leak but it was found that they could do no good. The boat filled with water and settled rapidly. Heavy waves stuck us with terrific force, smashing the lamps, leaving us in total darkness. Calls for life-preservers were heard on all sides, and the few wooden ones that were thrown in were seized by many frantic hands. Mother and sister were each provided with one. Furniture tumbled about, people fell over and trampled upon each other, some prayed, some cried; some crazed with agony, called for their friends on shore to help them, while others, in despair, moaned that we were all lost. The creaking and grating of broken timers, the solemn sound of the bell calling for help, the sound of distress from the whistle, which continued as long as there was enough steam to make a noise; all added to the horror of the situation. Above this noise and confusion, was heard the voice of Capt. Wilson, telling us to get the women up on the hurricane deck. The deck was soon crowded. A few moments later a monster wave struck the boat, breaking the iron rods that sustained one of the heavy smoke stacks. A flash of lightning followed, lighting the scene for an instant, and we saw the smoke stack fall across the deck, crushing, and burying several women beneath it.

While mother and sister were sitting on the edge of the hurricane deck, strapped in their wooden preservers and waiting for the end, mother said that probably the boat was so near shore that it might not sink below the surface. Those were the last words I ever heard her speak for at that instant the boat went down, taking me with it. When I came up my hands touched something, which proved to be apiece of plank about eighteen inches wide by six feet in length. It was about 2 o’clock in the night when the boat went down and about 5 the next afternoon I drifted in near enough to the shore to reach the end of a pole held out to me by a man suspended by a rope in the hands of several others from the top of that high clay bank south of Racine. The sixth day after the Lady Elgin went down we found, but could not identify by a scar only, the body of my sister, but my mother we never saw again.”