It was an exciting an optimistic day 115 years ago, April 16, 1901, when Hubert Fassbender, Anna Schwamer, Peter Ellenbecker, Elizabeth Fassbender, family and friends, gathered at St. Joseph’s Catholic Church in Appleton, Outagamie Co., Wisconsin, to witness the marriages of the two couples. The newspaper marked the event as a “double marriage,” but the vital records tell us that they each had their own set of attendants. As with all newly married couples, I am sure they looked towards their future as being bright, happy, and long-lived. From my perspective 115 years later, I am glad they could enjoy the day, and not worry about the years ahead. 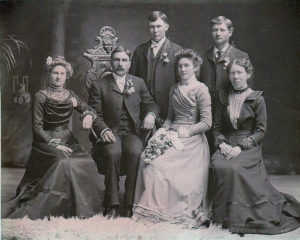 While Hubert and Anna’s lives were peppered with success and also great sadness, this post is about Peter and Elizabeth. Peter Ellenbecker and Elizabeth Fassbender chose as their attendants, Peter’s brother and sister; Maggie and John Ellenbecker, and Elizabeth’s sister Anna, and brother Henry.

Shortly after their wedding day, the couple settled into the Town of Bovina, Outagamie Co., Wisconsin, farming the land that Peter had purchased in November 1899. The homestead sat on 36.40 acres of land, with an additional 80 acres ready for cultivation.

I wonder how Elizabeth sent the news to her family? Or were her mother and father already there to help her during those long days and nights of Peter’s illness?

Elizabeth’s father, Peter, helped to arrange and pay for the funeral, which was held on October 27th. The receipts entered for probate do not give a clue as to where the funeral was held, but I do know that he is buried in the cemetery at St. Mary’s in Greenville, Outagamie Co., Wisconsin. The receipt states that Peter paid $3.00 for the service of the pastor (neither church nor pastor were named), Heid & Groth, Dr. Livery and Boarding Stable provided the Hack and Hearse, which was $16.00, and the casket and box was purchased from Frank Schreiter, Furniture and Undertaking. Baby Carriages &c for $34.25. Miscellaneous other expenses brought the total for the funeral to $92.05.

The couple had only been married for a year and a half before Peter so tragically passed away, leaving her with a nine month old, and another baby on the way, as Arthur would be born January 10/11, 1903. Peter died intestate with a mortgage remaining on the property he purchased, debts to various merchants, and a small amount of personal estate.

Why is this story important for me to noodle through? Because it plays a very large role in the “Appleton” chapter of my revision for the Fassbender book. The Fassbender siblings were married April 16, 1901, Peter purchased the house on State Street the next day, April 17th. At age 63 he had plans to retire and “take life easy,” allowing time to become involved in his church, play cards with friends, and not be tied to the tasks of running a large farm, and cheese factories. Upon the death of his son-in-law, all of this would change.

While this is just speculation, I can feel fairly confident to say that Peter and Elizabeth packed up their daughter and grandson, and moved them into the house on State Street. Almost immediately they appeared in the county court in Appleton to start the probate process. By the first of November, the personal estate of the household in Bovina had been inventoried, totaling $246.35, with Elizabeth having the right to choose certain household goods to keep, such as beds, kitchen table etc. On November 5, 1902, Elizabeth appeared before the judge to request that her father be appointed administrator to the estate, and the next day the estate was entered into probate. The estate would not be closed for nine long years, during which time Peter and Elizabeth were in and out of court. To help me better understand the sequence of events, I needed to create a timeline spreadsheet using the 111 pages included in the probate file as the source.

It is heartbreaking to read the transcription of Elizabeth’s testimony on December 9, 1902, declaring that her husband had died at home intestate, leaving her with a nine month old, and $1,000 mortgage. She was again in court on January 16, 1903, stating that her husband was the father of a son born January 11, 1903, and asking for the money that had been received from the sale of the personal estate to be used for the “maintenance” of the family during the progress of the settlement. She begrudgingly received a single payment of $75.00, as total claims against the estate amounted to $1,075.23.

Through all of this time her family was there to help her out, both financially, and I am sure emotionally. Her brother Hubert paid the interest on her mortgage in 1910, and payment for one-year loans made by family members to Peter Ellenbecker in 1901, were put on hold for nine years. Throughout this time she continued to reside with her sons in her parents home, assisting her sister Anna in her dressmaking business.

What is puzzling to me, is that the land was not sold through this long period of probate. If other property could be sold to pay off the debt, why not the land? Peter as administrator continued to pay the property taxes each year, some of the land was leased out, but the estate was closed December 12, 1911 showing a deficit of $1,258.23. 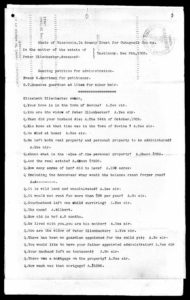 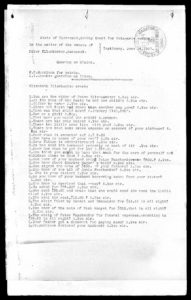 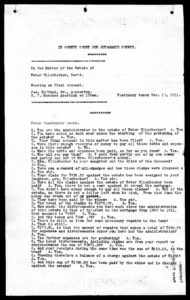 There are 111 pages included in this probate file. The story that this file tells is a chapter of its own. Fascinating to see the farm inventory, and the inventory of animals they were raising. Great detail, but too much detail to continue to move the book chapter forward. Seeing the detail on spreadsheet helps pinpoint the major events over the nine years. Hopefully I can relay the tragedy, but not drown the reader in too much detail.

Elizabeth would marry again on September 23, 1913, to Peter C. Tatro Jr. She would have two children with Peter, Ann born in 1915, and Henry born in 1916. They lived together in a home on South Elm Street, not far from her parents home. The reason this is important? Her son Arthur, who was born in the house on State Street, was eleven years old when she remarried, and he was given the opportunity to choose to move with her to Elm Street, or remain with his grandparents on State. Arthur chose to remain with his grandparents, and he lived with them till they passed away, and he continued to live and own the house till his own death in 2003.

It takes a family. My husband likes the quote: “If you want to make God laugh, tell him your plans.” Peter and Elizabeth planned on retiring to Appleton, having sold the farm to their son Joseph, the cheese factories to their son Hubert, John and Anna were already living and working in Appleton, and Henry was working as a cheesemaker in Little Chute. The family was settled, it was time to “take it easy.” But God had other plans.