I have to blame it on my mother. Yesterday she was snooping around in the online newspapers, and came across what I call a “Newspaper Mention” for her grandfather. A newspaper mention is a small item about a person, usually one sentence, and included in the paper’s social news section. In this instance, she learned that her grandparents, Anton and Louisa/Louise (Normann) Tapper, were about to move into their just completed home on Ann Street, in Hammond, Lake Co., Indiana.1

Looking at the clipping she sent me, I realized that this was a recent addition to the newspaper collection for Hammond. There was a different quality to the scan, and a huge difference in how large the pdf file was. So this morning, I too, took a look. 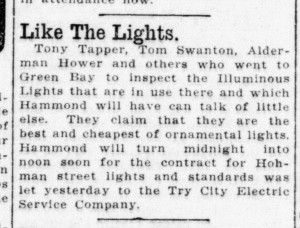 In my search I found this article titled: “Like The Lights.” The article states that “Tony” and two other men, traveled to Green Bay to “inspect the Illuminous Lights that are in use there.” Upon their return to Hammond, they contracted with Try City Electric Service Company (that HAS to be a typo! “Try City?”) to install the lights, so as to “turn midnight into noon.”2

Not having a 1913 postcard for Green Bay, I dug a bit further to see what I could learn about this new lighting. In a book titled The Municipality, I found this entry: “Green Bay has four blocks of ornamental lights installed by private contract. These are single light standards and cost approximately $100 apiece. They are spaced sixty feet apart, the total cost of the system being $2,400. This cost was borne by the private parties making the contract.” This information was obtained via a response to a survey regarding ornamental lighting.  The Municipal Reference Bureau in 1915 sent a questionnaire to the thirty-four cities in the state of Wisconsin with a population of 5,000 or greater. At the time of the publication of the report, twenty-six had responded. Eighteen cities reported that they had no ornamental lights, three were thinking about it, (Appleton was “contemplating installing some”), and eight cities reported that they had already installed the lighting, Green Bay being one of the eight.3

The subject of lighting the streets of Hammond was a major agenda item for the 1913 Chamber of Commerce. Much of the discussion revolved around what type of lighting should be put in place. In June the General Electric Co., of Schenectady, New York visited Hammond to promote the use of their “one-globe lamp” which they stated “produced a pearl white light, giving twice as much illumination as the proposed five cluster lamps proposed for [East] State street.” They told the Chamber that a playground in Chicago had installed the lights, and the nearest city to also have them was Dubuque, Iowa. A committee composed of William Kleihege, Frank Hammond, William Gostlin, Sr., Otto Knoezer and Anton Tapper made plans to visit the playground to see the lighting.4 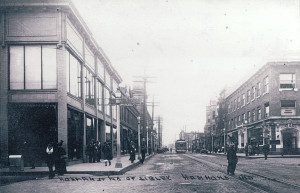 On October 25, 1913 the lights were finally switched on along Hohman and West State Street. A band was hired to play up and down Hohman Street on opening night.6  The streets of Hammond were now lit each night, making “midnight noon.”

The building on the corner, right-hand side of the postcard shows my great-grandfather’s building, the Tapper Building, or aka the German National Bank. Some day I will write a blog post about my mother’s and my obsession with collecting images of this building. We have quite an impressive collection to share!