My family lived in Owatonna, Steele Co., Minnesota from 1973 until 1980 – late summer moves both times. We lived in a house built by my parents; it had a view of Maple Creek, and sat above the fairway of what is now called Brooktree Golf Course. Our property had a small wooded section at the west end, which overlooked the fairway. 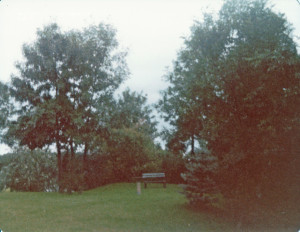 Some time in the mid 1970s, my parents purchased a park bench to place under the trees next to the birdbath. It was a real park bench, the kind that had holes in the feet so that it could be bolted into place. My mom thinks they may have paid $4.00 for the bench, one of two that were for sale. 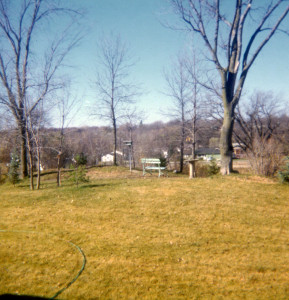 When they moved to Appleton, the bench naturally moved with them, and sat for many years, first on the front stoop, and later in the corner of the back yard. Eventually the wood rotted away.

I took the pieces and the legs to our shop, hoping to use the remaining wood as a pattern. Unfortunately the wood was thrown out during a shop clean out, so the project sat. Until now. My son is hoping to take his hobby to the next level, and is having fun adding “toys” to his basement workshop. The bench became one of his first projects completed in this new space. 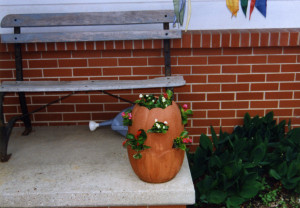 This weekend he brought the park bench home, and presented it to my mother. A piece picked up in an antique store in the late 1970s, is now fresh and beautiful with newly painted legs, and a cedar seat and back. Now the only decision is, where to place it, and when will it be warm enough to enjoy it. To be honest the bench looks so nice on his deck in this photo that I wasn’t sure that he would willing to give it away 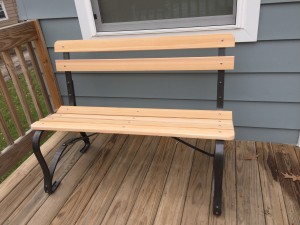