Archived post from “The Aroma of Bread,” first published 3 Mar 2013.

The fourth Tuesday of every January was the night for the White Clover Dairy  Shareholder meeting. In the early 80s following the buy-back of WCD from the Nestle Company, the meetings were held in the school basement with snack 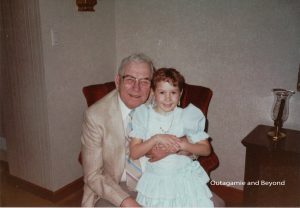 s and of course a few beers following the meeting. By 1985 the meeting was moved to the small dining room of Van Abels. As the company continued to prosper, dinner was being added to the meeting agenda, and the wives were invited to join the men for dinner.

So the question became, what to do with the women while the men were meeting, as they would have ridden out to Hollandtown with their husbands. So in the solid tradition of Fassbender hospitality, Marie invited the wives to join her in her home for cocktails, snacks and conversation.

When I joined the party in 1988, the tradition, and the party, was in full swing. I had worked till 5:00 p.m. and then had the 20 minute drive to Hollandtown, so I was a bit late. I still remember walking into the living room as all eyes turned to me, and I  looked at them. They were already settled with their drinks. Plates of cheese and sausage, nuts, and assorted other snack items filled the tables. Every last one of them dressed in heels and hose – including me. That is how we dressed in those days. Drinks and conversation flowed until the appointed time when we all got into our cars and drove over to Van Abels to join the men for dinner. 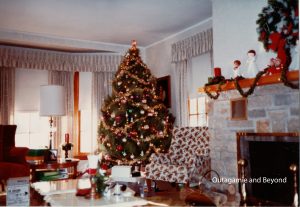 Thankfully this tradition only lasted a few more years, and sometime in the early 90s we were invited to join the men at Van Abels for the Shareholder meeting. It was also a relief for Marie. While she loved to host people in her home, she did not especially enjoy these evenings.

There are very few pictures that fully show the living room as it was in those days. These images hopefully will spark memories of this room, and all of the times gathered for plates of cheese and sausage, beverages and time spent as a family.