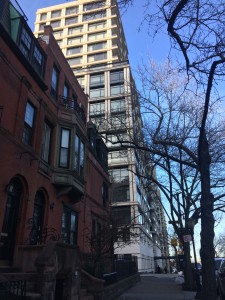 The site of Doctor’s Hospital, NYC

I was born in New York City, in a hospital that is now a high rise condo building, and was baptized in church that has since been razed, and parts of it placed in a chapel that is a few blocks away from the original site. Although the apartment building we lived in is still standing, it has now been condoized (is that a word?) It’s not my parents New York City!

My first visit to New York took place over my 25th birthday. Gary and I were there to attend the Eastern Dairy Deli Association conference and show. My mother asked us to walk by our old apartment at 649 2nd Avenue, so that she could see what it looked now, 25  years later. She said upon seeing this image that the building looked the same. Although I am sure I did not! 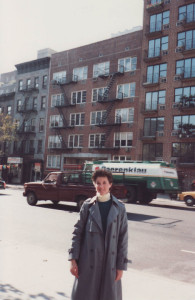 It would be another 25 years before I would have the opportunity to visit the “site” of my baptism. By this time the church, the Sacred Hearts of Jesus and Mary, which had been built in the Greek Revival style in 1915 at 307 East 33rd Street, had been razed. It had been closed in January 2007, merging with the Church of Our Lady of the Scapular-St. Stephen, and was razed in 2008.

A small chapel dedicated to the Sacred Hearts of Jesus and Mary was opened in May 2009. It is located at 325 East 33rd Street. According to the church website, the statues of the Sacred Heart of Jesus, the Sacred Heart of Mary as well as those of St. Jude and St. Anthony are from the old church, as is the “baptismal font and the copper cross above it are from the church. Within the worship space on the north wall is the restored painting of the Sacred Heart. There are six restored and backlit leaded glass windows on the east and west walls that were originally in the church. The altar was created by using central panels from the side altars of the church along with some new marble pieces. The cross with corpus that hangs on the reredos as well as the electronic organ were also taken from the church.” 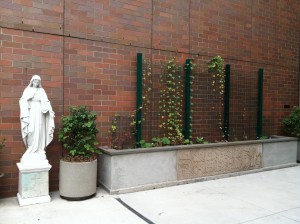 Chapel of the Sacred Hearts of Jesus and Mary, NYC

In 2012 as Hurricane Sandy was gathering strength, we headed south from our daughter’s apartment on East 93rd Street, to walk past the apartment (completely hidden by construction on 2nd Avenue) towards the chapel. We were lucky in that the chapel was open, but we didn’t have much time to look around as they were ready to lock up for the day. I snapped a few pictures, but was unable at that time to ask about the origins, or even photograph the baptismal font. We were able to get some nice shots of the chapel courtyard. 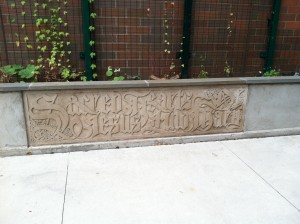 Sacred Hearts of Jesus and Mary

The day we visited the chapel was Saturday, October 27, 2012. As I mentioned earlier, we had no idea how strong, and exactly IF Hurricane Sandy would hit New York. At this point in time, we assumed that we would still be able to enjoy my birthday, celebrating on my actual day of the week, and date of birth, and be able to get on the plane home early Monday morning.

Well we soon learned that we would have to make other plans. As this was our first trip together to New York to visit Kate, we had turned in hotel points for the weekend visit. Kate was living in a very small 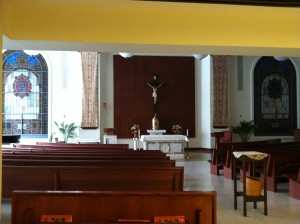 studio apartment. Space was limited, and we had assumed that we wouldn’t be able to comfortably sleep three in the apartment. Gary and I got up early Monday expecting to be able to get to the airport, but no flights were going out of LaGuardia. So we hightailed it up to our daughter’s apartment, knowing that if we waited too long we might not get a cab. We spent the next five nights living together, sleeping Tetris style, between her twin bed, a twin air mattress, and the floor.

It was an adventure. It was actually kind of fun. Well, fun for us as we were not in the flood zone, we did not lose power – although we watched transformers blow to the north of us, and we watched on TV as lower Manhattan flooded – and we had enough food and wine. We learned on this trip that 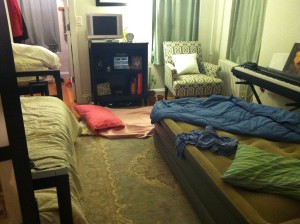 we could easily spend a visit staying all together, in a small apartment in Manhattan.

As part of my Genealogy Bucket List, I did want pictures of the baptismal font. Kate was kind enough to head down to the chapel and snap a couple of pictures for me. Thanks Kate! 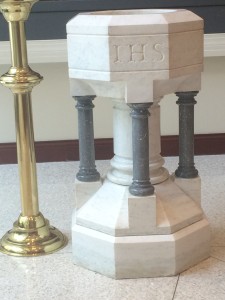 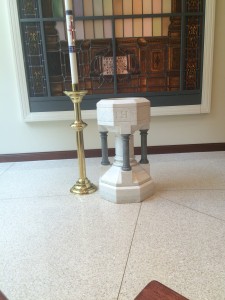