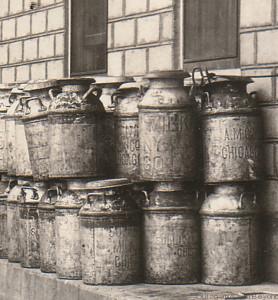 I first started researching this topic in 1998 at the request of my father-in-law who wished to know more about his grandparents. It still saddens me that he did not live to enjoy my findings, but even more so, that I was unable to discuss the stories, and to ask what he remembered about the events that I was uncovering. The prompt to blog this history is the fact that these stories are disappearing. That the successful cheese factories that were built by the Fassbender men and later sold to large corporations, have had the story of their origin either altered or deleted from the company’s history. I can’t let that happen.

Peter Joseph Hubert Fassbender had been residing in Ellington Township, Outagamie Co., Wisconsin for approximately 23 years when he decided to enter the cheese and butter manufacturing business. He chose a site across the road from the family home to build his first factory. The factory began operation in 1887 and had a capacity of 11,000 pounds of milk per day, which Peter obtained by purchasing milk from his farming neighbors, and from 24 of his own cows. Peter’s eldest son, John, returned home to work along side his father. As a 20 year old, he was an experienced cheesemaker, having worked in various cheese factories since the age of 16.1  Peter also enlisted the help of 19 year old Joseph, and two years later in 1889, 14 year old Hubert joined the family business.2  Showing remarkable skill and interest in the making of cheese, Hubert would be in “full charge of the factory” by the time he turned 16 in 1891.3  It was at this time that John left his father’s factory and “embarked on the business himself, conducting a factory for five years.”4  The youngest son, Henry, just seven years old when his father began making cheese and butter, literally grew up in the factory and would follow in his elder brothers footsteps, and in time become a cheesemaker in his own right.